Zen And The Art Of Rebellion: Blake’s 7 and the Awesomeness that was Avon

Today we take a break from the Wicked Women Blogfest to welcome the fabulous Simon Bestwick and celebrate the launch of Hell’s Ditch.  (Buy it! Buy it now!) 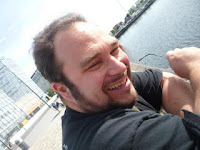 When I was a boy, science fiction and horror on TV were pretty much the same thing to me. Star Trek was fun, but the British stuff was the best. There was Dr Who – then in the classic Tom Baker era and heavily tinged with dark, scary Gothic horror – and another of the shows that shaped my childhood and imbued me with a love of SF, fantasy and horror. Blake’s 7.
Blake’s 7 was set thousands of years in the future, with a galaxy ruled by the evil, fascistic Federation. The hero, Blake (Gareth Thomas), a former freedom fighter framed for molesting children, is sentenced to exile on a prison planet. En route he and several other prisoners break out and gain control of an alien spaceship, the Liberator. Controlled by its sentient computer, Zen, it can outfly and outgun any Federation ship. With this, Blake wages war against the Federation.

Although often derided for low-budget special effects and supernaturally camp costume design, Blake’s 7 was also notable for its darkness and pessimism. That, and its premise of a group of gutsy rebels pitted against a despotic authority, influenced a lot of things I’ve written since – including my current novel, Hell’s Ditch.

Black and white goodies and baddies stuff tends to get old pretty quickly – especially on TV, where the story stretches out across hours of drama. Blake’s 7 avoided that pitfall by giving the characters’ mixed and sometimes conflicting motivations: Cally (Jan Chappell) was a telepathic alien with her own personal vendetta against the Federation. The gentle giant Gan followed out of loyalty to Blake. Ex-space pirate Jenna’s motives were more complex, a blend of fascination with Blake’s idealism and (implicitly) attraction to him. Timid thief Vila (Michael Keating), didn’t really have anywhere else to go. And then, of course, there was the coolest, most complicated character of the lot.

Kerr Avon (played brilliantly by Paul Darrow) is, ironically, the character people tend to remember most from the show. When Gareth Thomas left after the second series, Avon assumed control of the Liberator – although without the complex rivalry-cum-friendship between him and Blake, the series was never quite the same.

Avon was Blake’s apparent antithesis: a cold, brilliant computer expert who’d nearly stolen a fortune from the Federation’s Central Bank. He had no time for idealistic politics, and still less for idealists.
Cynical, ruthless and above all a realist, Avon’s principal goal in life was to acquire plenty of wealth and evade capture. Blake’s crusade was diametrically opposed to that aim, and Avon showed every sign, at times, of actively hating Blake and wanting him dead. Except…

Avon had multiple opportunities to get rid of Blake, but never did. In fact, in one episode, every other crew member has been captured; Avon can operate the ship alone and stands an excellent chance of getting exactly what he’s always wanted. The only thing the Liberator can’t fight off is three Federation ships attacking together. When Zen informs him that three such ships are en route to their position, Avon roars with laughter… and sets off to rescue Blake.

In their last scene together of the second series, Avon snaps at an injured Blake: “Why didn’t you stay in the medical section? Couldn’t you have trusted me just this once?” Blake’s response? “Avon, for what it is worth, I have always trusted you – from the very beginning.”

He’d die before admitting it, but Blake is his friend – the one person he’d ever put himself in danger for. One of the beautiful things about the show is that it’s never stated – there are no big declamatory speeches – but it’s always there. There’s something very British about that.

None of which stopped Avon being ruthless: as Darrow later pointed out, the man in the white hat can’t shoot people in the back, slap women around or perform other morally grimy actions, but the man who walks behind him can. He also had all the best lines:


Avon was a key element in making the Liberator’s crew a hive of conflicting aims and agendas, the polar opposite of Star Trek’s moral certainty and unity of purpose. And he was always there to undercut Blake and ensure he was never an infallible hero in the Captain Kirk mould.

Avon was the best thing about Blake’s 7 for me; there’s a dash of him in the dry, sardonic character of Gevaudan Shoal in Hell’s Ditch. And yes, Helen’s grey-haired, cynical mentor is called Darrow, in a nod to an actor I hugely admire – and the character he created. 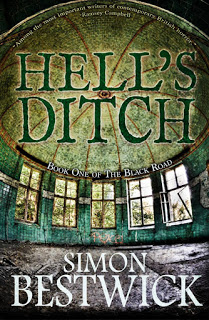 Simon Bestwick is the author of Tide Of Souls, The Faceless and Black Mountain. His short fiction has appeared in Black Static and Best Horror Of The Year, and been collected in A Hazy Shade Of Winter, Pictures Of The Dark, Let’s Drink To The Dead and The Condemned. His new novel, Hell’s Ditch, is out now.
Posted by Jenny Barber at 10:09 am