From thieves and tyrants to witches and warriors, here are twelve tales of women who gleefully write their own rules, women who’ll bend or break the social norms, who'll skate along the edge of the law and generally aim to misbehave.


Juliet E. McKenna - Win Some, Lose Some
Christine Morgan - The Shabti-Maker
Tom Johnstone - Kravolitz
A. R. Aston -  No Place of Honour
Adrian Tchaikovsky - This Blessed Union
Sam Stone - The Book of the Gods
Chloë Yates - How to be the Perfect Housewife
Stephanie Burgis - Red Ribbons
Jonathan Ward - A Change in Leadership
Jaine Fenn - Down at the Lake
Zen Cho - The First Witch of Damansara
Gaie Sebold - A Change of Heart

(and other regional Amazons)  |  Spacewitch

Presenting twelve more stories of myth and magic in the modern age...

(and) other regional Amazons!) |
DRM free from Spacewitch 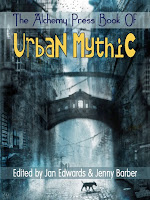 There is magic out there on the street and the Mythic are alive and well and creating chaos in a city near you.

"When we think of a wonder, our minds go most often to the great buildings of the past - the pyramids, the Taj Mahal, Stonehenge - but the human mind can make almost anything wondrous. We walk with wonders every day, through the power of curiosity and imagination and our human tendency to make stories about what we fear, what we desire, what we wish to understand. This collection offers new glimpses into the wonder we all feel."  From Kari Sperring's introduction.

Discover standing stones, burial mounds, ruined castles and sunken cities: the ancient sites that litter our landscapes; the ancient wonders that possess a mysterious appeal that cannot be denied.