Anyhoo, bouncing around forums to see what the peeps thought about Fcon gets some nice comments.
It's the not so nice comments which are illuminating though - I like those ones, it helps you work out what needs fixing for next year. (Not that I'm the one in charge next year... but you get the picture...)

So on Shocklines there's a thread here -
http://p082.ezboard.com/Back-Home-From-Fantasycon/fshocklinesforumfrm2.showMessage?topicID=50996.topic

which pretty much summarises the main complaints we get from everyone. If you're a member of the Shocklines board please go ahead and post your thoughts...

For myself, in response to the comments -
Publicity - you'll get no arguement from anyone on the committee that we screwed that one up this year. They'll do much better next year. Much much better. Trust me on that. They have people. :->

Attendance figures - just checked the final numbers and we had around 330 peeps there. (See my below post for why the place seemed empty!) This is a good number. Last year with the Gaiman and Barker duo we had 420-ish.

Goodie bags: we underestimated numbers - totally my fault, that one. There was some good stuff went in the bags if you signed in Friday/early Saturday morning (and about 80% of people arrived Friday!)

The other media guests: good god we tried. We really really did. No one we approached could do it. And we approached a lot of people.
They'll be trying again next year, I'm sure.
Posted by Jenny Barber at 7:12 am No comments:

And that, ladies and gentlemen, was Fantasycon 2007!

Give me about a week or so and I'll do the Fantasycon Blog Carnival I was muttering about on the BFS Forums - need to give everyone time to blog their thoughts first! (In case there's confusion, the Blog Carnival will be posted here, the idea was what was on the forums... sorry, still a bit dazed!)

So, how was it then?

Well, still mostly sick as a dog but managed to stay vertical long enough to do sensible things. General consensus is that the con was a bit on the quiet side - however there were more events going on so people were more spread out... (that's my excuse and I'm sticking to it!) And next year they're getting a proper publicity dedicated person and more help to shout about it in the necessary places and I know they're also getting help to improve things to the next level. (Whatever that may mean!)

(And for some reason I also promised I'd do a couple of odd things for Fcon next year. But I'm definitely not on the committee. Oh no. Can't catch me that way.)

But back to this year.
Only panel I got to see this year was Jo Fletcher's editorial one which was absolutely brilliant. Would have liked to have seen Chaz's Write for Life thingy that came after, and a couple of the others but alas, could not be done. Will have to rely on others for panel chatter.

The bar almost managed to cope - except 4am Sunday morning they had to kick people out because they thought they were out of beer. (Actually they weren't, because when Richard, our go-to manager guy arrived in the morning he said there was a spare stash and he'd left instructions with them about where it was and he was going to kick their asses for being idiots.)
Also, one of the pumps broke.

The raffle... was long. Very very long. Had to leave after an hour or so (sick as a dog!) - apparently this one lasted about 3 hours.

The banquet... hee! Now that was fun. We did the room up Halloween style, with a couple of books on everyone's seats, spooky soundtracks playing, neon green cobwebs, candles...
Very cool!

As for the awards - well, it was a bit different this year - done properly on stage, with two presenters per award (and an attempt at 'Hollywood glamour', apparently)
The winners:
The Sydney J. Bounds Best Newcomer Award - Joe Hill (collected by Pete Crowther)
Best Non-Fiction: - Mark Morris: CINEMA MACABRE
Best Artist: Vincent Chong (collected by Pete Crowther)
Best Small Press: Peter Crowther, PS Publishing (who started to run out of room on his table)
Best Collection: Neil Gaiman: FRAGILE THINGS (collected by Steve Jones)
Best Anthology: Gary Couzens: EXTENDED PLAY: THE ELASTIC BOOK OF MUSIC
Best Novella: Paul Finch: KID (or K.I.D. if you're Chaz B!) from the Pendragon Choices thingy.
Best Short Fiction: Mark Chadbourn: WHISPER LANE from BFS A Celebration (collected by Sandy Auden. Also, rumour has it the story has been picked up by a couple of reprint anthologies too...)
BFS Special Award: Ellen Datlow (Collected by John Grant)
Best Novel: Tim Lebbon: DUSK (who needed a drink and Pete Crowther got a bit nervous so had to whip his wine away before it got it nicked!

All in all, rather good fun!
Thanks to everyone who came, you were all fab!
Posted by Jenny Barber at 1:22 pm No comments:

The good: the fab Debs fixed the computer problem. Hurrah!
The bad: still sick as a dog. At this rate, I'll be spending Fcon in my hotel room...

Other Fcon news - that infamous duo, Smith and Jones, will be previewing Monstermania on Saturday night at 11.45pm - this will kick of the late night film program (of which I have no idea what's being shown...)

So bring your books or buy some in the Dealer Room!

Posted by Jenny Barber at 3:57 pm No comments:

The universe hates me.
Sick as a dog. In technicolour. Hoping it's just a 24hr thing. And you don't even want to know what the computer is doing... It couldn't have waited just one week, oh no. Bastards.
This is doing nothing for my sanity. Nothing, I tell you.

On the upside, if you want to catch Mark Chadbourn at Fcon he's popping over for lunchtime on Saturday for the BNH signing. Bless him. He won't be there the rest of the weekend though.

And if you're a BFS member and can drag youself out of bed on Sunday for the AGM, one of the items is going to be debating some proposals about the eligibility of BFS publications and their contributors for the awards. You may have read Steve's op-ed piece in the last Prism...
Posted by Jenny Barber at 2:23 pm No comments:

3 days. Oh god.
Schedule's now totally done and confirmed though. As of 7am this morning. Oy, my nerves.
And we got a load of boxes of lovely stuff delivered from Gollancz a few minutes ago - raffle stuff, mostly.
Banquet is going to be bangin'! Oh yes indeedy. :->

And in case news hasn't filtered out anywhere else, (and I can't remember if I've blogged it before...) but Friday night we're doing a mass signing in the main Con suite - GoHs (their books will be available to buy from Erik in the Dealers Room, or you can bring your own) and other attending authors (you have to bring your own books or trust that some of the dealers have some copies lurking - again, Erik of Fantasy Centre or Bob of Talking Dead are your most likely targets there... Oh, and PS for their authors...)

The diddly bar outside of the Con room/Dealers room will be open until about 9pm/10pm but if you use that a lot they'll keep it open longer. The main bar, as always, will be open until there's no one left. They promise there'll be more seats this year.

Steve Jones will be doing a mini launch/advance signing thingy of the latest Best New Horror in the main bar. And there'll be World Horror Con goodies for sale on the BFS book table out in the reception area.
If you check out the BFS forums, the current schedule has been posted by our Vicky - but I'll probably work my way to blogging it here in the next day or so.

Oh, and the awards thingy should be fun, we have many guest presenters for it this year! You don't have to have attended the banquet to see the awards - we'll wander around and give the all clear for sneaking in once the munching and wotnot has finished.

If there's any Fcon questions now's the time to post on the BFS forum or email one of us - no one will be around from Thursday so it needs to get to us Wednesday night latest...

Repeat after me: it will be fabulous, darlings!
Posted by Jenny Barber at 9:57 am No comments:

Ok, laptop sorted. Now we just need the beam projector and some of the books for the mass signing (don't ask. No. Really don't. Thanks.)
Also, there's a semi slot on Sunday morning - it needs to be in the bar as the main room will be getting set up for the banquet and the second room will have the tail end of the AGM - but what to do? We've been trying to come up with something for about 2 months and still haven't got diddly. Gaaaah! Quiz? Informal reading? RPG game? Argh! Suggestions on the BFS messageboards if you will...

Admittedly, things seem more disorganised than they actually are, but panic is good for soul.
And this time next week I'll be wandering around like a madwoman with a clipboard pointing and shouting as it'll be a couple of hours until registration officially opens and there'll be someone turning up late with stuff they want put in the goody bags (not that we don't appreciate stuff for goody bags, but Friday morning's the time to deliver them pretty please. Ta!)
And 2 PA systems this year! Good god, I hope someone knows how to work them...

Happily, I can take a very very back seat at the AGM this year! Just got to throw together the Spec Pubs accounts and I'm done, mate.
(Don't say it Andrew, I'll get it sorted this weekend so that I can go to Fcon without getting duffed up...) :->

And on top of that, we just exchanged on a house today. It's been a very trying 3 months as the vendor is particularly dim and Evil Twin and the boyf will be renting it so they've been stressing a bit as they had to move out of their old house a month ago so have been dossing down here...

Have a cat picture... 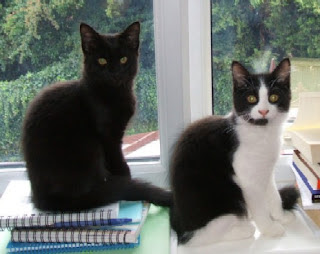 Et voila - 2 of the psycho kittens of the apocalypse. They think books are tasty.
Posted by Jenny Barber at 1:28 pm No comments:

Yes, that would be the sound of someone freaking about it being 11 days to Fcon. 11 days. F! me.
Banquet is full, Britannia is full, Dealers Room is full. (and yet, people are still trying their luck.)
Revised schedule still isn't finalised as we're still waiting on a couple of people's confirmation.
Don't mind me, I may be having several simultaneous nervous breakdowns
every day until Fcon Sunday...

On the plus side, Fcon mag looks great - we got it back from the printers last week.

Now all we've got to work out is where we can borrow a laptop with powerpoint on for someone's presentation, and we'll be laughing. (Hysterically. And possibly a little too loudly.)