The Thief of Precious Things by A.C. Wise

"The world has been still too long, crows above, foxes below, and men somewhere in between."

There is a glass tower in the city, a place where the humans congregate and work on secret things, but fox-girls have a habit of getting into secret things - especially when there's Crow Lords to get the better of.

There is a fox-girl who dared what her sisters wouldn't and had her name stolen from her. She breached the tower but those memories, too, have escaped her and now what she found and what she stole is wanted by humans and Crow Lords alike.

There are a man and a woman whose goodwill and need for peace get them tangled up in trickster games, and when you play with tricksters, change is inevitable.

I'll confess, I have a thing for trickster tales and this one is a rather glorious example. It's about freedom and becoming something else and shaking the world up when its gotten stuck in a rut. This latter can be seen particularly by the division between the two trickster races - the brotherhood of Crow Lords get authority (and capitalisation) while the sisterhood of fox-girls have submission as one of their recognisable natural attributes; a display of extremes that illustrates the need for something a little more balanced if things are to move forward.

Our fox-girl protag makes for a heroine who is both charming and daring, as she gets herself into trouble then finangles her way out of it and the changes wrought in her wake promise interesting times ahead. While the Crow Lords are identikit ciphers, the human support, Yuki and Ani, have character enough to make you care about their divergent needs and fates.

Thief is set in a post-apocalyptic world but it has the kind of enchanting storytelling that can be found in the best Charles de Lint. Definitely a world to which the author should return to as I'd love to read more stories set here. All in all, a fantastic tale. 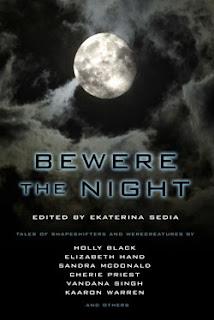 Found in Bewere the Night, ed. Ekaterina Sedia
Published in April 2011 by Prime books, $14.95 (or thereabouts) from assorted retailers.
More about A.C. Wise here.
Posted by Jenny Barber at 12:15 pm No comments: