Despite being fully ensconced in the last (hurrah!) assignment of the current history module, it occurs that an exo-bloggage round up is due.  Thusly, here's what's been happening...

On Shiny Shorts we've recently had reviews of The Satyr’s Head: Tales of Terror, Julian: A Christmas Story, Something Wicked #19 and Rough Music,with reviews due soon for Shimmer #14, Mammoth Book of Body Horror, The Respectable Face of Tyranny, Adrift on the Sea of Rains, and, ooh, many more... We also welcomed to the fold new reviewers Jennifer Rickard and Mario Guslandi.  (And are always looking for more volunteers to join us...)

Over on Girls' Guide to Surviving the Apocalypse I've posted on artefacts to save the world and the fairy apocalypse, and from the rest of the gang there's more gadgets and music posts, Ask the Experts with Chris Farnell, guest post from Dana Fredsti as part of her Plague Town blog tour, musings on the loss of the internet, zombie hamsters, the easter bonnet of the apocalypse, a little something on the Hunger Games, in Know Your Idols we have Commander Shepard for the Mass Effect fans and Donna Noble for the Whovians, there's also survival tricks our mothers taught us and a warning about the haggis apocalypse...


Posted by Jenny Barber at 7:57 am No comments:

Well, gosh. Wasn't that fun. I might even go so far as to say Best! Eastercon! Ever! (Though it being only my third one, it's a small sample pool to judge by!) Ignoring the fact that the hotel meals had reached new lows and apparently the prices in the downstairs bar were apt to bring about heart attacks, the whole event had a fantastic vibe to it that practically screamed 'this is your clan'.

And, oh, the panels! I do love me some interesting panels! The only one I missed that I really wanted to see was the archery one (looks winsomely at Fcon committee peeps in the hopes they can get an archery thingy in for Fcon this year. Pretty please?) But Saturday had a full day of funky stuff - there was Sufficiently Advanced Magic with Marcus Gipps, Juliet E. McKenna, Stephen Deas, Chris Wooding, Adrian Tchaikovsky and Shana Worthen - talking about magic systems and the developmental comparisons with technology; an utterly fantastic Gender Parity on Panels at Conventions thingy with Kari Sperring, Juliet E. McKenna, Emma Peel, Farah Mendelsohn, Kat Takenaka and Paul Cornell which I could have listened to for much longer as it was both fascinating and educational and left me thinking that maybe it wouldn't be so scary sitting up on a panel at a con; in a similar vein there was How Not to Suppress Women's Writing with Tricia Sullivan, Juliet E. Mckenna (she was busy this convention!), Penny Hill, Amy McCullock and Ian Sales, (and in vaguely related news, check out the all new Fantasy Mistressworks blog that Amanda Rutter has set up!). There was also an extremely interesting panel on A History of Feminist SF in Britain with Roz Kaveney, Lesley Hall, Andy Sawyer, Maureen Kincaid Speller and Kari Sperring which turned out to be one of those ones where I wished I had taken notes of all the names mentioned for later searching out of books.

And, oh, Saturday readings - Anne Lyle with her new book - The Alchemist of Souls - just launched and had sold out in the dealer room by Saturday afternoon. Awesome. Talking of awesome, Tom Pollock, people! Reading from his upcoming book The City's Son (out in June from Jo Fletcher Books) the man is a rock star! Has to be, hands down, the best reading I've ever been to - you don't just want to buy his book, you want to rent him to read it to you as well!

Among other delights, Sunday had Occupy the Metaverse with Tricia Sullivan, Farah Mendlesohn, Adam Roberts and Paul Graham Raven - talking about radicalism and revolution in SF, and almost got a bit heated towards the end when trade unions got mentioned...

Oh, and, I did bar stuff. I never do bar stuff. But Jan and Pete came up for the Newcon launch on Friday (Jan is in the Dark Currents anthology! You'll want to read it. Hers is a fab story of steampunky pirates.) And we plotted mad plots for Ancient Wonders and jumped innocent looking authors for possible contributions. And sat in the bar and chatted with peeps. Which is a thing that usually makes me run away screaming in the opposite direction. But it was quite nice, so I may have to try it for Fcon this year once Reg duties are done...

And there was the Game of Thrones sword-throne. (No, I didn't sit in it. But here's a picture anyway!) 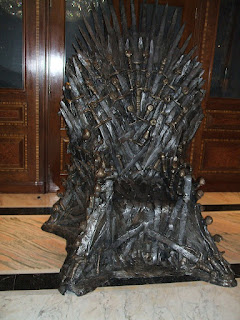 And there was tech! I inherited mum's old Blackberry not long before the con so had a blast facebooking and twittering during the con, just as the gods of tech intended. Which came in handy during the BSFA awards ceremony, as I could witness the horror as it occurred on twitter instead of having to sit through it live. And those genius Eastercon peeps did a guidebook app that updated panel items and gave you the maps and schedule and all sorts. On your phone! How very cool is that? And if that's not enough, the main room stuff was filmed so you can watch some of the panels here.

And the peeps for the Bradford 8-Squared bid got the dubious pleasure of organising Eastercon next year. (That would be Juliet McKenna taking over the universe...) ;-) And apparently Eastercon will be in Glasgow in 2014.

And I didn't get lost on the way there for a change. Nor on the way back. A thing which is listed in hidden tomes somewhere as the definition of a minor miracle. All hail the transport gods!

And all in all, the whole thing was abso fabulous! Can't wait to be let out for Fantasycon in September!
Posted by Jenny Barber at 1:01 pm No comments:

A little more on Ancient Wonders

Further to my last, you'll find the particular story preferences of m'fabulous co-editrix Jan on her blog here. (Whereas mine are in the last post!) All told, no matter what the setting or sub-genre, an engaging story is what we're looking for. That submission link again!
Posted by Jenny Barber at 6:15 am No comments: