So here's the thing - there's been a lot of chatter lately about genre sexism and convention harassment and such like.  Good well reasoned points have been made, useful information has been given, emotions have gotten extremely high on all sides, anti-harassment procedures are becoming more obvious and appearing at more conventions, all of this is a good thing.

But there have been a few comments here and there that keep sticking in my brain and won't stop bugging.

Other areas of life are not the issue here.  It's our people, those people who should be better than all those other not-our-people, being assholes in our favoured places of socialisation that is hitting the buttons. And unlike many other areas of life, conventions are spaces where we can actually exert some control over our environment and the framework of interactions within it, and expect a reasonable response when the problems crop up.

"It seems to be more prevalent in US conventions/you don't get that kind of thing in the UK..."
Bollocks. I know women who have experienced problems with gropers and creepers and the like at conventions going back twenty or thirty years when they first got into the fandom thing, and endured it throughout their many years of conventioning afterwards. I know women and men, straight and quiltbag, who experienced dodgy things in the last couple of years.  For some of them it was their first convention, for some of them, it was old news. Some people stop going to certain UK conventions because of it. UK fandom is not a precious paragon of virtue in this stuff.

"I've been going to conventions for XX years and I've never had it happen to me/seen it happen..."
I'm happy for you. Really. Doesn't mean it hasn't happened or that people haven't been affected by these total assholes who keep thinking civilised behaviour doesn't apply to them.  And honestly, in saying this kind of thing, while it may be accurate for the person who got lucky with their con experiences, it still carries an implication that it couldn't possibly be happening to anyone else and kinda dismisses the experiences of those that have had something creepy happen to them and they get enough doubts about that as it is.  (You misinterpreted it. You're overreacting. It's just their/your sense of humour. They're lovely really. You're being oversensitive. They only do it when they're really drunk. You smiled too much. They were just flirting. You should have told them to go away. You should have smacked them one. You should have told someone else and they'd have done something.)

These things are difficult to talk about at the best of times.  Hell, they're difficult to think about at the best of times and a standard coping mechanism is to block it out and move on, and make a note of who to avoid and where and when.  And even the slightest hint of dismissive language from someone else can be crushing and stir things up all over again and make you never want to mention it as a thing that actually happened.

"But we shouldn't forget the good men..."
Well yes.  But also no. See, the thing of it is, the decent men and women at conventions and in other genre related things aren't the problem here. They're the majority. They're the ones who'll help out when some creep's trying it on and rescue you.  (And, by the way, why do people need rescuing in the first place? People shouldn't need rescuing from anyone at a convention! How is that a thing we still accept as normal?) The problem is, the other ones. The people no-one talks about in public but, if you're lucky to know someone who knows someone, will be the people you're warned about.  (If you don't know anyone to get the warnings from, then you're left thinking it's just you when they try it on. And wouldn't it be easier to not go to another convention or volunteer in an organisation if this is the thing you're going to get from the people you meet...)

And, look, I get why people are wanting to big up the nice folks, I could share plenty of stories about the men and women in the genre who stepped in to be awesome, that's not the point. We shouldn't need to give cookies to people for not being creeps. Not being a creep should be the standard expectation for a person.  And people aren't talking about the creeps to publicise how generally awful genre people are and bewaaaaare the terrible cesspit environment of the SF convention and that's all you can expect from everyone ever if you dare go to one.

Talking about the bad ones is more a case of saying, look, there's these serial assholes who plenty of people quietly know about but for a variety of reasons, no-one has done anything about them or their dodgy behaviour and that's not right. It has never been right. And now there's enough people talking about what the moronic assholes are doing for people to realise they weren't the only ones being targeted and that, actually, some of the perps behaviour was just a bit shitty so lets make it stop.

And the not being alone in this thing is a strong component in all the talking about it over bloggage and social media. Because that guy that you thought was a bit pervy but didn't make a thing of it, because, obviously, it was a minor thing, or your fault, or whatever... that guy? Turns out he did it to other people too.  And they weren't alright with it either. And they had their doubts, same as you. And it doesn't matter that other people don't see that side of him, or dismiss it for one of the many reasons these things get dismissed for, because there are people who have seen that side of creepy guy and aren't willing to let it slide anymore.

"But men get creeped on too."
Yes, they do. That sucks. No one should have to deal with being harassed by anyone. Transgender people also get harassed at conventions. So do people of colour. And it's not just men who do the shitty things. Women do it too.  And it's not only the women who are targeted. Men are targeted too.  (Yes, I know, binary gender descriptives. Forgive me that one. All-folks get targeted. All-folks do the targeting.)

That being said, there is a higher level of men creeping on women. And there's underlying societal currents related to the concept of men being afraid of women laughing at them and women being afraid of men killing them, and someone did a really good post on this recently which explains it properly, but I can't actually find it now. Argh!  ::headdesk:: But man following woman around has a whole bunch of different connotations to woman following man around.

"But geeks score high on the Autistic/Aspergers spectrum/are naturally socially inept...so you can't really blame them.."
Stop it right now.  The Autism/Aspergers thing was debunked somewhere, but I can't find the link at the mo... (Argh! Total linkfail today!) Read this thing here about the socially inept excuse though.

Also that socially inept thing? Works the other way too. The people that the creeps are targeting are also often socially inept, and thus unable to actually react to the creeps in a way that would stop the harassment, or have them say anything useful about it later to anyone else.  In these cases, the victim's own perception of their shyness/generally being socially rubbish creates a feeling of self-blame as, obviously, their own personality 'defects' were a factor in not stopping things they didn't like when anyone with a bit of nous would have laughed/said something witty and/or rude and generally cut creeper-dude off at the pass.

"It's just good natured flirting."
Subjective. If you know the person you're doing sexy banter with then you'll know how far you can go, and when to stop. Otherwise what's good natured flirting to one person, is awkward and embarassing and oh-god-please-shut-up-and-go-away to another. And even for those of us with a low tolerance for it, flirty conversation can still be fun, just don't be an asshole about it. And please don't be dismissive of the people that don't have the kind of personality/sense of humour to put up with/say anything about a constant unwanted barrage of the X-rated stuff.

So, yeah, talking about con harassment is good, but please just be aware that some of the well meaning comments can be a bit triggery to the people who've experienced these things.

Posted by Jenny Barber at 7:43 pm No comments:

A Pirate's Life for Me!

Hurrah! Piracy has been ebookified and is available via Wizard’s Tower Books, your regional Amazon and at some point in the next month or so at Spacewitch. And at £2 it’s a steal, so get ye-self over there and get one!

See, according to the stories, there are two types of career options for mermaids. The quiet mermaids are the ladies of leisure, lounging around random rocks combing their hair and gossiping with their bestest gal-pals. Occasionally one may be inspired by stories of humans to get involved with the strange land creatures, and by assorted means pursue their target until they’re dutifully wed or consigned to death due to an enchantment gone bad. The bolshier ones are having none of that foolishness, and prefer to seduce their human prey into the water where they can drag them down into the depths for fun and drowning. Every sailor knows this.


What every mermaid knows, however, is a different matter. Their stories tell of all those times their selkie cousins lost their skin to human treachery; all those times their sisters got captured for amusement and profit and were ill paid for what assistance they gave drowning humans in storm churned waters; all those times they were hunted by humans who thought they could get an advantage in fishing or just grab themselves a mermaid wife. No sensible mermaid is going to let that carry on unremarked. Not for long.

And while there are plenty of activities where mermaids excel – smuggling, treasure hunting and salvage, music, art, marine sciences (of course), underwater archaeology, combat (especially of the shock troop variety), legitimate trade, hunting, exploration and storytelling; by far the most popular choice is piracy. 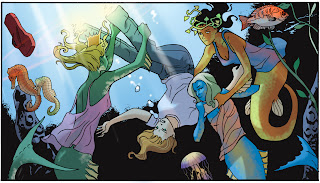 And really, why wouldn’t it be? Mermaids have the tactical advantage in the water - they can sneak up on their targets and scuttle a ship hull without even once showing their head above the surface. Or if they want a little more sport, they can sing their prey into the water and hold them there until the air is gone from the humans’ lungs. So taking down a boat and picking the plunder out of the wreckage later is a common way to make a quick profit – after all, the mermaids have tithes to pay to sea-witches and the ruling mer-clans, so they might as well let the humans stump up the booty. 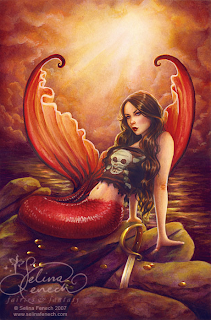 But like a lot of pirates, half the fun is in the fight. When their blood gets going they like the challenge of facing the humans in open combat, matching tooth and claw and stolen blade against whatever the humans can wield. Wagering they’re fast enough out of the water to take down their foes before the biting air and solid ground turns the advantage back to the humans.

And so my story "Past Lives" - where human-pirates hunt mermaids and mermaid-pirates hunt humans and the spectre of an ex-mermaid pirate captain hangs over it all.

3 – A Pirate’s Life for Me by Selina Fenech http://selinafenech.com/archives/?nggpage=2
Posted by Jenny Barber at 4:06 pm No comments: