Ok, admittedly there's still 2 days worth of reading left in the year... (well, one and a half) but as discussions seem to be popping up, here are my favourite fictiony goodies of the year...

Short stories first, as I've been going on a bit of a binge this year...

Labels: fiction, year round up 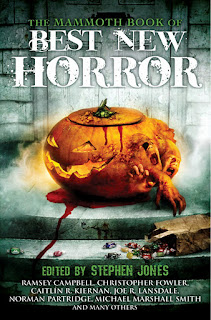 Found in The Mammoth Book of Best New Horror #22 (ed. Stephen Jones), Lavender and Lychgates by Angela Slatter is definitely a story that should be read at least twice to get full appreciation of something that is both moving and creepy.

It tells the story of a girl finding her place in the world, but it also tells the story of the living coming to terms with the dead (and possibly vice versa) and the old trouble that haunts the family.
There's a dead brother and a restless sister, and an ill timed trip giving blood to his grave. There's a fox-woman who's trying to stir up some revenge and a lost woman who's willing to help from the shadows and all told with an evocative fairy tale quality that easily enchants the reader.

The characters are excellent and the family relationships and interactions both completely real and quite appealing. Oh, and there's a street where 'books are born', which is quite possibly the loveliest bit of city-setting I've ever seen. What with the print shops and paper makers and ink makers and bookshops, is it any wonder that our heroine chooses to take up the book-binding trade?

Now if I can just find an e-book version of the Tartarus Press collection Sourdough & Other Stories that this was originally published in, I'd be a very happy bunny indeed.
Posted by Jenny Barber at 6:00 pm No comments:

OU goes well. Quite well actually. Got an excellent mark on the last assignment (stunned, shocked, amazed) and so far it's all rather enjoyable, if not easy, then at least logical and full of all those lovely a-ha moments. Which is rather surprising as m'fellow students are of the opinion that this particular module is a bit of a dog. (Mind, I suffered through the compressed archaeology course so after that, anything is light relief...) ;-)

The essays do tend to take up a considerable amount of brainage, however. This month it's all about the European Reformation. (Something I have so far managed to avoid knowing anything about!) And now I totally get all those Spanish Inquisition jokes! And Iconoclasm. And Calvinism. And William of Orange! (And the Grand old Duke of York - but that was last month's bit of the course! Yes, I might have sung a bit when I realised the connection there... History is so cool!)

Have also discovered that I prefer the historian side of things to the archaeologist side of things. (Possibly the aforementioned archaeology course is a bit to blame for that too!) Possibly it's also got to do with the fact that analysing pot sherds and corn husk impressions and wotnot makes me snooze off but give me some juicy text on what people have been doing and I'm so there! Scandals! Shenanigans! Revolutions getting mucked up due to hard-line militancy and lack of funding! But mainly, I think, it's discovering all the connections between everything. Connections and getting to put into context all those vague people and events that get lodged in the brain through other means.

Did I mention History is cool? ;-P
Posted by Jenny Barber at 8:22 am No comments: 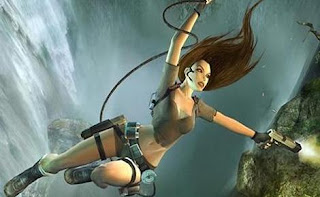 I am, it must be said, something of a fan of fictional archaeology. In real life there’s oodles of paperwork, funding issues, and a metric ton of research that needs doing before you even contemplate going anywhere (and even then you risk being pipped to the post by some random metal detectorist having a lucky day); and once you get to your site, you then have to spend months, years, even decades carefully sifting though every minute particle in order to maintain a proper archaeological record of everything. Which is a good thing. Really.

Fictional archaeologists, however, have it much easier.

They often come from a family of archaeologists or similarly talented historians, linguists or adventurers – thus giving them a step up when it comes to knowledge, experience and contacts in the field. Little Lara Croft and Indiana Jones went out in the field with their parents, little Evelyn Carnahan had a childhood steeped in all things Egyptian (and a dad who was on the King Tut tomb expedition), little Nina Wilde, Ben Gates and Daniel Jackson were heavily influenced by their parents occupations. 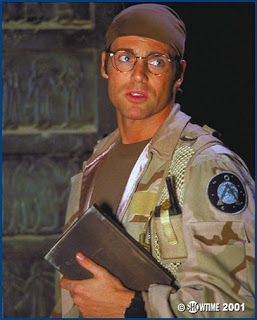 But, fictional archaeologists also have pretty impressive skills in other fields and often have second jobs as international spies or similar. They will have picked up a wide range of combat related skills, extreme sports, computer skills that are just a bit scary; and the fictional archaeologist always has useful friends if they need emergency transport to some out of the way location or a favour pulled in high places.

When it comes to funding, they usually don’t need to worry about grants (unless it’s plot specific) – if they’re not independently wealthy, they get commissioned for their expedition by some wealthy benefactor or government organisation (often mysterious, probably wants to take over the world), or they have the ill-gotten gains of their last big haul to draw on. 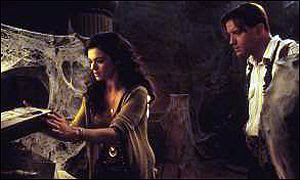 They will always be the one to make an amazing breakthrough when it comes to finding the long lost site or artefact of legend. Doesn’t matter how many people have spent their life looking for the aforementioned objects of desire, it’s the fictional archaeologist who’ll get the essential last clue, or put the random pieces together, or just accidentally stumble on it while getting their morning cup of coffee.

They always find what they’re looking for, and it’s always in near-perfect condition. If aboveground, a lost city will have plenty of remaining standing buildings and a secret room somewhere that’s ceiling high in shinies. If underground, the entire complex will be intact with all devices still working hundreds of years past installation (we’d like their builder’s number.) Yes, there will be a few booby traps lying around (there’s always at least one), but your fictional archaeologist will, quite luckily, be the only one who can navigate them safely.

Any guardians, either living or undead, who might have issues with an expedition trundling in and nicking off with their heritage will cease to be a problem once the fictional archaeologist gets talking to them, as, guess what? Turns out your archaeologist is also destined by ancient prophecies (or that handy memento found at another site and worn for luck) to be the saviour of the ancient people/the world/all existence. If this doesn’t work, however, the fictional archaeologist will be the one who can out fight, out think and generally out manoeuvre the protectors who have trained for centuries to do their job. 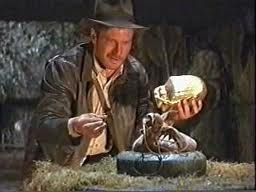 Some fictional archaeologists work in partnership with museums and other organisations interested in preserving an accurate site or artefact record, but if a site happens to get accidentally totalled in the midst of an expedition, no one is going to make too much noise – especially if the archaeologist comes back with something impressively shiny. After all, it won’t have been the archaeologist’s fault, there’ll have been a crew of naughty tomb raiders, bandits or minions from a secret organisation set on world domination involved somewhere.

And bullet holes in things just add to the mystique. ;-)