Oh yes, there is evidence of sartorial terrors... 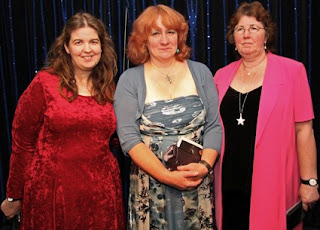 But let's not forget: 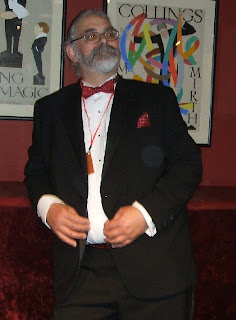 And this would be ace photographer Peter Coleborn! Photo taken by Jen.
Posted by Jenny Barber at 11:58 am No comments:

DGLA gossip is picking up across t'internet.

Check out Torque Control, where you'll find a selection of links to other posts as well as some interesting comments. Particularly fascinating is Mark Charan Newton's blog and the mass of comments it's attracted...

Joe Abercrombie posts about his near miss and shows you how dangerous he looks when packing weapons... this is why we're all voting for him next year...

Also, check out the DGLA thread on SFF World, which includes contributions from the fabulous James Barclay!
Posted by Jenny Barber at 11:24 am No comments:

If you fancy seeing a few photos of the truly fabulous event, official photographer Peter Coleborn has loaded about 40 onto his flickr site... watch out for all those people wielding weapons!

And Liz De Jager, who was one of the tremendous stewards, has words and pictures on her blog.

And not only that... the fantastic Juliet McKenna has written a superb report on her LJ blog too!
Posted by Jenny Barber at 1:18 pm No comments:

Phew, what a night! Where to begin? There was Anne Nicholls with a moving tribute to David Gemmell, there was the awesome double act of Stan Nicholls and Debbie Miller doing many and various, and then there was the fabulous James Barclay. What a guy! Auctioneer supreme, he won himself whole legions of fans with his rendition of A Call to Arms. Give the guy an Oscar, for he is a god!

As for the awards... with just over 10,000 people voting on the short & long lists combined, from 74 different countries, the winner of the David Gemmell Legend Award was: Blood of Elves by Andrzej Sapkowski. A Polish author who's well known in his own country, this was his first English work (I think!). The award was a large engraved battle axe thingy and was accepted on his behalf by the fabulous Jo Fletcher, Goddess of Gollancz.
Each of the nominees also nicked off home with their own mini-Snaga.

And then there was the auction, with some high quality luxury prizes. The charity was Medecins Sans Frontieres, and over £1000 was raised. Half of which came from getting £500 for a signed first edition of Legend. Blimey. Personally, I'm utterly gutted that some rich git had done an internet bid on a cameo in a Stan Nicholls Orc book because that meant the starting price was totally out of my league. Bugger. The boys of Bragelonne (and also sponsors of the event) seemed to be quite enthusiastic bidders too.

And there were a nice bunch of people in attendance, too. Juliet McKenna is always great to talk to (and I never seem to get to talk long to her, alas) and Robert Holdstock... what is not to love about talking to Robert Holdstock, what a fab gentlemen!

And I even got to play photographer's assistant as m'good friend Pete Coleborn was official court photographer for the event! The photos will go up on the DGLA website shortly, I think...

All in all, a great night. Definitely one that folks should try and get to next year. And don't forget to pop along to their website and show your support!
Posted by Jenny Barber at 3:03 pm No comments:

So, the BFS have just released the final shortlist for the BF Awards... this year, for the first time, members of the BFS and Fantasycon get to vote on the final stage shortlist to get to the winners, with the awards to be given out at Fantasycon on the night of Saturday 19th September...

There's a hell of a lot of categories this year, so you're best off checking the link above to see who's up for what... now, it may be me, but it does seem rather heavily slanted to the horror side... Shame, cos the long list had plenty of great fantasy stuff on it...

Also, congrats to Sarah Pinborough and Allyson Bird for making it as the only women on a male dominated list... Oh, there's also Selina Lock and Tori Amos in the comic category, so that's cool! :->

And, seriously, how did Lost not make the TV short list? That's just shocking!
Posted by Jenny Barber at 8:07 am No comments:

Ah, so May was the zombie month for this year was it? Last year August was the no brainer where nothing useful got done.

First up, a recommended read... just got done reading Elizabeth Moon's trilogy compilation thingy The Serrano Legacy - that was great fun. Especially liked the Aunt-Power! in the third one, Winning Colours. And am loving the space piracy/privateering. (Well, who doesn't love space piracy! Now all we need is some space ninjas...)

Next up, am midway through an OU short course - Archaeology: The Science of Investigation. Proving to be quite fascinating, and a bit challenging with some of the science bits. Also there's some giggle-worthy names on some of the case study sites so my inner 12 year old has plenty to snicker at... (Wetwang! Krapina!) :->

The DGLA swanky do is coming up in a couple of weeks and, thankfully, they've downgraded the compulsory Black Tie edict to optional. Which is good because posh frock and me...ain't ever happening. Think I've managed to find a suitable moderately quirky outfit... now just have to work on that whole lack of social graces thing... :-> Luckily Alchemy mates Jan & Pete are going too so I've got someone to talk to. :->

On the Alchemy front, check out the Alchemy blog for my peeps' news... Mike Chinn has sold a couple of stories, Jan's sold a story and an article, and Debs is up to five novels on Authonomy! Crikey. Busy bunch.

And li'l sis has jumped onto the web, suddenly being all twitter and myspace and facebook and bloggy. What's actually quite disconcerting is seeing her age written down in black and white. She's not that old. She can't be that old. How did she get to be that old? She's only supposed to be wee. :-O

Of course, it's all her fault that I discovered Twitter. (Oh look, there it was. Quick, plant a flag...) So if you tweet, I'm on as jenqoe.
Posted by Jenny Barber at 12:16 pm No comments: