Today we welcome the author of Wicked Women story ‘No Place of Honour’ – A.R Aston, take it away! 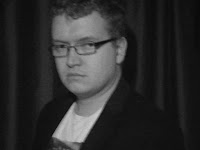 I am 24 years old English and History graduate from the long vanquished kingdom of Mercia (or the East Midlands of England if we must insist on being modern). I have been writing in the speculative fiction and fantasy genres for years, though I have yet to earn a crust with the work I have sold; more like delicious crumbs.

When not writing you can find me voraciously reading anything and everything I can get my hands on, like some tea and bacon sandwich-fuelled Johnny Five.

I have been writing casually for as long as I have been able to.   I began getting serious with my work when I started writing fiction on writing forums, where I finally got an audience for my work, and even more vitally, harsh critiquing. Those years online, having my work dissected and flayed bare by people who had no interest in sparing my feelings or coddling me was invaluable to me, and I think helped me when in 2011 I first got published professionally for a small press. Luckily enough for me, my first piece was accepted within a few months of submission. This I later learned was spectacularly speedy in publishing terms, and I was unwittingly fortuitous. The real work of writing is as much learning from the many, many rejections and learning patience as it is from actually having works go to print. Writing is not an industry one goes in for an easy life.

Over the years I have had numerous fantasy, sci-fi and horror short stories published with various indie publishing, and have co-edited three anthologies with old veterans of my writing forum days.

Oh too many to count. In the world of science fiction, I find the world-building of Alastair Reynolds poetic and sublime in the traditional sense of the word. His depiction of the Lighthuggers of Revelation space made me think of relativistic space travel in an entirely different manner. Stephen Baxter’s joyous excitement over his created worlds is infectious, and the way he and Pratchett logically and explosively extrapolate the uses and effects of the universe in the Long Earth sequence is a particular inspiration to me.

More recently, Ann Leckie’s work with gender and consciousness in the Ancillary trilogy has given me numerous ideas to explore in one of the novels I am currently writing

JRR Tolkien is in many ways the foundation stone upon which modern fantasy is built, so it would feel churlish of me not to also cite him as a massive influence.

I also love Joe Abercrombie, the self-proclaimed lord of grimdark. His dialogue is witty and sharp as a rapier, and he has created some of the most likeable assholes I have read in a long while.

Both history and fiction is replete with women who aim to misbehave – do you have a favourite wicked woman and why?

I love the story of Julie d’Aubigny, the legendary bisexual, cross-dressing female duellist and opera singer who roamed 17th century France fighting in illegal duels, singing opera for kings and having numerous torrid love affairs with men and women alike. She is a figure who defies any category imposed upon her by the society of the time. Hers is a wild story made all the more impressive for being predominantly non-fictional.

As for fictional wicked women; I am rather partial to Thorn Bathu, the snarling, scarred heroine of Joe Abercrombie’s Half the World.

You recently had your story ‘For a Fistful of Diamonds’ published in Superhero Monster Hunter: The Good Fight – how did you approach your take on the genre for it and what makes a good superhero story for you?

The idea of the superhero is incredibly broad and diffuse as a genre, incorporating everything from detective noir to interstellar space opera, political thriller to comedic heist. Thus, I felt it important to not stray too far from the core aspect of the genre, exploring the extraordinary powers of my protagonist, and their effect upon his psyche and his place in society.

I wanted my character to be a pyrokine, but explored in an inventive way no one else has done before. Hopefully I have succeeded, and laid the foundations for a far larger and more expansive world.

What can you tell us about the Outliers Project?

The Outliers Project is a collaborative effort between me and four other authors to produce a ten book series of linked novella anthologies. It is a global tale of a world in which a minority of entities have been endowed with powers of ancient pedigree. We wanted to create a superhero mythology which felt plausible and allowed us to delve into the details of how a world like ours would cope with the revelation of gifted individuals, and how empowered people would fit into our world. You may have already read the first forays into the Outliers universe if you have read the final four short stories of Emby Press’ The Good Fight: Superhero Monster Hunter, which hints at the tone of the coming event.

What excites me most about this project, and what I feel differentiates it from other superhero settings, is its focus. It is a series without a reset button, where the world is changed and stays changed, and no one is safe. There is a destination; a full story in ten parts, building relentlessly to a startling and thrilling conclusion. I really hope readers will enjoy our stories once we release them out into the wild world.

As a reader, good short fiction is a delight that allows me to dip into rich settings as and when I please, without the immersion and time a good novel demands. Short stories are the tapas bar to the novel’s four course meal with all the trimmings.

Short fiction is a challenge for an author, as it demands you create and populate a world readers can relate to and adore over the course of but a few dozen pages. It forces you to be a prose impressionist in a way; painting just enough to hint at a deeper premise and a world for your readers to complete. I like the discipline of the format, as it forces you to think about every sentence you use and to be ruthless in self-editing; if it doesn’t serve the central premise, it is extraneous.

Horror definitely suits short fiction, as good horror needs but a few words to plant terrible seeds that allow a reader to populate with nightmares more terrible than the author alone could conjure. I was once involved with an anthology that collated together one hundred 100 word pieces of micro-horror that demonstrated how few words were required to incept some properly creepy images into the mind of a reader.

My favourite piece of short fiction of all time is probably Ray Bradbury’s ‘There Will Come Soft Rains’. It is such a beautiful and nightmarish vision of a post-nuclear world, which is all the most impressive for lacking any characters that are not poignantly posthumous.

I would do away with a cliché which often occurs when a writer wants to show a clash between an industrial human culture and a less advanced one, where the human/white male protagonist begins as an enemy of the noble savage race, but eventually becomes one of them, and learns their mystical ways, eventually leading them in a battle against his own kind.

Basically, these stories always end up devolving into some variation of Dances with Wolves or Pocahontas. I find the plot boring and predictable, and I think it is often a waste of a fascinating premise or setting. My ur-example of this would be Cameron’s Avatar. The setting he created was full of interesting technologies, fascinating creatures and stunning imagery, but it was all in service of a plot which seemed to have no ambition.

… That and zombie apocalypses. A zombie story without at least a necromancer in there somewhere is just lame.

Outliers is currently looming on my horizons like the swaying surface fins of a submerged leviathan; I shall soon enough be up to my ears writing and plotting ten novella anthologies, culminating in a staggering multi-author finale which I hope will blow our readers’ proverbial socks off! Fun times ahead. Look out for the first

Whilst writing these novellas, I am in talks with publishers into having my debut fantasy novel, The Hobgoblin’s Herald, published in the next twelve months. In addition, I am writing its sequel and have the scaffolding up on several other novels under construction. Saying I like to keep myself busy would at this stage feel like an understatement…

Thank you for joining us A.R. Aston!

A. R. Aston is a speculative fiction writer from the former industrial town of Swadlincote, located deep in the Heart of England (in the left ventricle if you must know…). An avid student of history and english literature, he has always had a passion for the written word. When not writing, he can be found reading voraciously, creating a functional time machine, and composing spurious facts about himself.