Today we welcome the multi-talented Christine Morgan – author of the Wicked Women story ‘The Shabti-Maker.’ 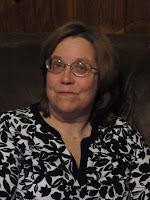 I like to write fun stuff, where fun can be anything from outrageously over the top purple prose to humor to extreme horror to silliness to smut. I like to play with language, to experiment with it and goof around. I enjoy the challenges of doing mash-ups, crossovers, and pastiches, particularly if I can meld things that might not normally, in a sane world, go together.

I also have a lifelong love of mythology, history, sociology, anthropology, psychology and folklore. A lot of my stories involve historical settings, mythological elements. Ancient cultures fascinate me, as does the idea of writing from perspectives greatly different from my own. Whether that means child POV characters, animals, aliens, elves, inanimate objects … each is its own interesting puzzle.

On a personal level, I’m in the middle of the whole classic life-upheaval just now, having recently divorced, moved to a new state, started over in a new job, only child’s all grown up and off to college, etc. In one sense, it’s terrifying. In another, liberating; this is the first time since my sister and I started sharing a room that I’ve had a space entirely of my own. Well, my own and the four cats; I’m training to become a crazy cat lady in later years.

Even as a kid, I was a big reader, a big maker-upper of intricate stories for my toys (my Barbies had some soap-opera stuff going on, let me tell you), and the one among my circle of friends who’d more often than not be the idea person for what we should play next. I remember writing assignments in grade school, and doing one piece about a brave daddy fox trying to lead the hunters away from his family.

I got into roleplaying games as a teen, and drama club in high school. There may have been some painfully Mary Sue bits of Lord of the Rings fanfic way back when; I’m glad I haven’t found any of those in the archives. Writing down the gaming adventures was the next logical step, which eventually became a series of fantasy novels.

Every single one I’ve read and some I haven’t … one way or the other.
Though I got officially ‘started’ writing fantasy, I knew even then my true calling tended more toward the horrific. I’d been reading Stephen King since age 10, and would go to fantasy conventions only to find myself the odd duck out when people were listing their favorite authors.

But then, a few years ago, it all came back around full-circle again … I’d been tinkering with historical fic, with the pirate era, tall ships, and so on … but then I discovered Bernard Cornwell’s Saxon series, and the lectures of Professor Michael D.C. Drout, and everything clicked … it was Viking time. Vikings hit everything I liked best.

I’ve also spent a lot of time trying to catch up on some of the literary classics I missed with that change of major, and experiencing the variety of genres, voices, and styles. Wodehouse is a kick; I’ve done a few stories aiming for that kind of tone. I’ve mashed up Austen and Lovecraft. I hugely enjoy Janet Evanovich’s Stephanie Plum books, and Sharyn McCrumb’s Appalachian series, Robert McCammon’s everything but especially his Matthew Corbett books … variety, whatever, bring it, I will give about anything a chance.

These days, I’m reading and loving a lot of extreme horror and bizarro. I’m phobic about nearly everything, I’m a total wuss, I can’t even put in eyedrops or pull out a giblet packet without squicking, but I cannot get enough gross, weird, sick, twisted fiction.

Well, I’m not sure for misbehaving, but Aud the Deep-Minded is one of my favorite ladies of history; she was an early Icelandic settler, commander of her own ships and men, politically savvy, powerful, scored good influential marriages for her children and grandchildren. To earn a moniker like that – Deep-Minded – proves that she was known and respected for her wits and her wisdom.
There’s also Freydis Eriksdottir, sister of Leif Eriksson … now, SHE was wicked … in the sagas, she manipulates men into feuds, kills a bunch of people with an axe, and may be most famous for the anecdote of how she, while pregnant, charges out of her hut during an attack by skraelings (Native Americans), rips open her top, smacks herself in the breast with a sword, scares the attackers away, and shames all the men for their cowardice.

You’ve recently had Murder Girls published by Evil Girlfriend Media – how did that come about and what can readers expect? 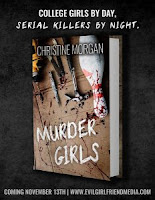 Murder Girls had originally been released in ebook by KHP Publishers, but Katie at Evil Girlfriend just loved the premise and approached me about doing a revised print edition. It’s the story of five college housemates – brainy Rachel, sporty Jessie, angry Darlene, shy Gwen, and mysterious Annamaria – who are just each doing their own things one evening when Rachel, watching a program about profiling serial killers, remarks, “I bet we could get away with it.”
And why not? They’re sure not the profile. Add in a pervy peeping tom with the world’s worst timing … next thing you know, the girls are standing around a body, with a mess to clean up … and a new hobby that quickly becomes an obsession.

With this one, I wanted to examine some gender-role issues, to put the shoe on the other foot as it were. You see those studies or classroom questionnaires about safety, about rape-prevention, about all the million-and-one ways women are conditioned to be on their guard or else, and how rarely men have to think about any of that instead of living it every single moment of every single day.
So, there’s some social commentary, and some looks at the ways we’ve become desensitized to violence and screwed up about sex … but hey, let’s be honest: it was also a chance to have a bunch of college girls carving up dudebros. Some of the scenes were disturbing and uncomfortable to write; I hope they’re that way to read as well.

You’ve written across many genres ranging from traditional fantasy to historical horror – do you have a current favourite genre to work in and if so, why?

Think I already covered this, but, to say again, gimme those Vikings! Historical horror and dark fantasy, with over-the-top descriptions, purple prose, adjectives, blood and gore and slaughter! Or those weird combinations. Myth-meets-Mythos; I’ve done Lovecraftian stuff mixed with ancient Greece and Rome. Ancient cultures; I’ve written Egyptian themed stories, and Aztec/Maya, and even all the way back to caveman days.

But yeah, the Vikings is what I keep coming back to. The cadence and rhythm of it, the language, alliteration, kennings. Besides, no other stories are quite as much pure fun to read aloud. I get to use my Viking voice. I write with that original oral tradition in mind; they have to sound right in my head, they have to read right, it’s awesome. Listeners seem to really respond to it, too. The Viking readings always go over well.

You’ve also edited several anthologies – has this changed how you approach your own fiction?

It certainly has made me all the more conscious of proofreading and polishing and following the guidelines … as an editor, I admit, I’m looking for good stories, yes … but I’m also looking to not take on too much extra work for myself. Maybe that’s lazy of me; I don’t know.
It also makes me appreciate everything editors do even more. That’s hard work. The selection, the balance, the dealing with however-many individuals, the juggling. And the rejections! Augh! Rejection letters are no fun from either end.

I used to think I couldn’t write it. I used to think – being wordy by nature, as this interview no doubt demonstrates – that I was just geared toward writing longer works. Novels, but not only novels; each novel wanted to be a trilogy. When I was doing fan-fiction, it was the same way, except as installments in an ongoing series.

I suspect my roleplaying game background had something to do with that; I’d trained myself  to be in campaign mode, so there always had to be more adventures lined up, more plot hooks to explore, new characters to introduce and follow up on. There was always a NEXT waiting in the wings.

I won’t say I’ve unlearned that, or trained myself back out of it, because  I haven’t. I’ve just also worked on narrowing my focus, condensing and containing ideas which might otherwise sprawl. It’s most important in horror fiction, since horror is more emotion than setting, and horror seems somehow to be more effective in shorter doses. Easier to sustain.

As for recommendations, I love anthologies because you can sample, you can try a little bit of one story and then another, see what suits you, try things out from a variety of authors. Themed anthologies are always a favorite of mine, to write for as well as to read. I like seeing how different people approach similar subjects or challenges, and how creative they can get.

The epic prophecy. Any time something opens with the whole voice-over info dump about how, long ago, the wise foretold blah-de-blah and then it’s some doofus destined to save the world no matter how reluctant, foot-draggy, or inept … and they DO.

I’m currently working on final edits and layout for the third Fossil Lake anthology, UNICORNADO! The contributors really hit it out of the park on this one; I wanted weird unicorn and/or natural disaster tales, preferably both, and they delivered bigtime. Looking at a February 2016 release date, after which it’ll be time to decide on a theme for the fourth Fossil Lake!

I also have about four unpublished novels to revise, two novels and a novella to finish, a few short stories I promised to submit to anthologies, and I recently had an idea for a sort of bizarro not-quite-kids-book kids book.

And my first Viking collection will be coming out in 2017 from Word Horde! Reprinting many of my earlier Viking stories, plus some original … it’ll be called The Raven’s Table, and I am very thrilled and excited to see this happen.

Thank you for joining us Christine Morgan!

Christine Morgan spent many years working the overnight shift in a psychiatric facility, which played havoc with her sleep schedule but allowed her a lot of writing time. A lifelong reader, she also reviews, beta-reads, occasionally edits and dabbles in self-publishing. Her other interests include gaming, history, superheroes, crafts, cheesy disaster movies and training to be a crazy cat lady. She can be found online at https://www.facebook.com/christinemorganauthor and https://christinemariemorgan.wordpress.com/