Today we welcome the author of the kick-ass Emily Nation (Fox Spirit Books) to answer a few questions – Alec McQuay, take it away…. 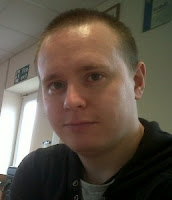 Who is Alec McQuay and what do you write?

Hi! Alec is a… Wait, I’m not famous enough to get away with 3rd person. I’m a genre fiction writer from West Cornwall and I like to write across different genres. Fun for me, a nightmare for those who have to allocate it a place on Amazon / a bookshelf. At the moment my work is centred around the western and steam / cyber-punk world of Emily Nation.

I’ve been writing odd bits of fan-fiction since I was about ten but I’ve been putting in serious time on it for probably the last six years or so, since I became a dad. I ended up writing my first novella because I was awake at all hours and needed something to occupy my time and when that got picked up by Fox Spirit, I just kept at it.

Which authors have been an influence to you?

I’m a big fan of Terry Pratchett most of all – he was a phenomenal writer, world builder and character creator and also a wonderful human being. I had the privilege of meeting him at a book signing and he was so warm and friendly, in spite of my awkwardness. I also love Brian Jacques and his Redwall series, along with Jamie Hewlett and Alan Martin (Tank girl creators) Alan Moore (Watchmen, V for Vendetta etc) and Gerry Duggan, who was head writer on the most recent Marvel Now! Deadpool series. I love their humour and the darkness of their writing.

Let’s talk Emily Nation – what’s it all about and what led you to writing about post-apocalyptic assassins?

The book is about the titular character making a complete balls-up of a job and having to deal with the consequences. She was young, over confident and armed to the teeth and instead of nipping a problem in the bud, she created a power vacuum that lead to the destruction of the things she cared most about. Long afterwards she is sought out to return to the scene of her mistake and help deal with the chaos she helped to create.

I’m drawn to assassins because they’re quite frightening. They can be anything from an exceptional fighter who can outdo much larger, stronger opponents toe-to-toe, right up to a killer in the distance who you never even know are there. If you upset the wrong person, a woman with a rifle could be taking aim at you right now, from a rooftop a mile away. Nothing you could do to stop them and you’d never even be able to raise the alarm. Much scarier to me than a monster under the bed. The setting I love because you can do anything with it – you can take anywhere you like and warp it in the wake of a natural, man-made or even magical disaster. There’s just so much potential!

Naturally I love Emily, but Jemima is my favourite. She is absolutely lethal and you get the sense that she has been through a hell of a lot that she doesn’t talk about, but she doesn’t let it define her. She’s violent, she swears (a lot) and while she has a sexualised aspect, she has complete agency over how she presents herself. If you’re daft enough to ogle her and she breaks your nose for it, that would be your fault.

My least favourite character is Mr King. Everyone has to have some depth to them and a motivation for what they do, but beneath his hard exterior he’s just a callous, nasty little shit of a man. I’ve known quite a few people who go out of their way just to be unpleasant and he’s pretty much a patch-work quilt made from thirty years-worth of gits.

I’ve grown up either surrounded by stories in those settings (Mad Max etc) or surrounded by people going on about this, that or the other being poised to bugger the world up beyond repair. Climate change, war with any one of so many other cultures, aliens, meteors, the Sun spontaneously turning into a huge ball of peanuts and sending us all into anaphylactic shock. If it’s not the environment then we’re all eating too much / little protein, too much / little carbs, everything is going to give you cancer, we’re going to create robots and those robots are going to call us names and beat us up… It just never ended. Mind you… ask a Native American or an Australian Aboriginal person about what it would be like to live in a post-apocalyptic setting and they might just laugh and tell you to take a look around.

The love of the post-apoc setting spun out of all that really, and Spares in particular with our obsession for living longer rather than better. The more time we have to do a thing, the less urgently we approach it. That’s natural to a degree so that we don’t exist in a constant state of panic, but if something happened and suddenly we’d never die, but everything still wore out? How would we cope? How would immortality change us? I had fun with it but one day I want to come back to that setting and give it a lot more time and a lot more thought. Some people barely have enough humanity to last them a lifetime. What the hell would they do with eternity?

What are your recommendations for other post-apocalyptic adventures?

In terms of movies, the four Mad Max movies to date with a particular love for Fury Road. Richard Matheson’s I am Legend is a wonderful book (albeit a sub-par movie) if you’re a fan of zombie-apocalypse settings and games wise, give Borderlands a go. It’s part post-apoc, part western, funny as hell and a really great ride. One of the downloadable content packs is called Island of Doctor Ned and is a zombie-outbreak type area that is at least seventeen different kinds of fun. Ticks multiple boxes.

I’d be in deep trouble if I said post-apoc, right…?

One of my major gripes in genre fiction, movies, television and allsorts is the idea that violence is absolutely fine so long as no-one is swearing. I’ve played games where people are killed by having giant chainsaws rammed through their torsos, they’re held aloft and the chainsaw’s motor is revved hard until blood spills out everywhere and the victim is dead, but no-one said anything naughty. I’ve seen shows where people have bamboo rammed under their fingernails and their response sounded like AAAAAAAAAHHHHHH. I’ve seen movies where people are torn apart by horses tied to each of their limbs and they didn’t curse once. I’m not saying everything adult in nature has to be saturated with bad language but if you feel that the depiction of horrific violence is less offensive or “adult” than seeing a human being tortured, killed or eviscerated, well then I think you should jump into Room 101 along with the cliché.

If you could kill off any character from any other book, who would you choose and how would they die?

I want two but they’re from the same book(s)! I would take Vernon Dursley and Delores Umbridge (of Harry Potter infamy), have them grabbed by the lapels by a swarm of disgruntled Hogwarts owls, hoisted to about 20,000 feet and dropped into an industrial wood chipper. I have an absolutely pathological hatred of cruel people and bullies who abuse what little power they have to just be foul to other people. Reading those two made me very cross.

Currently I’ve got a lot on my plate – I’m writing Emily Nation 2, working my way through a novella series with a group of writers producing a superhero series by the name of Outliers, I have some short fiction in the works for Fox Spirit and I’m training for my first powerlifting competition in November. Never enough hours in the day, but I love it.

Thank you for joining us Alec!

Alec McQuay is a horror, fantasy and science fiction writer hailing from Cornwall in the south-west of England; an area renowned for natural outstanding beauty and the worst internet connections in the country. Capable of going off at odd tangents, bizarre flights of fantasy and generally being incapable of taking things like bio-writing seriously, Alec spends most of his time scribbling notes and ideas on his phone and talking the ears off his wife and friends about whatever mad-cap scheme he intends to write next.  You can find him at his website https://alecmcquay.wordpress.com or on twitter as @VampiricChicken

Emily Nation is published by Fox Spirit Books and is available from Amazon.