Gooood morning funky peeps.  Today we’re kicking off the new year with the author of Wicked Women story ‘How to be the Perfect Housewife’ – Chloë Yates, take it away! 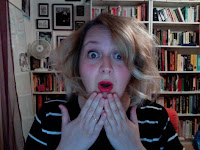 This is one of my first interviews so I should apologise in advance because I’m made almost entirely from nonsense. I’m an English immigrant who’s been living in the middle of Switzerland for nearly a decade (no, my husband’s not a banker). It’s an incredible place to live, I’m very lucky, but I miss dear old Blighty. No kids, lots of books, and one elderly dog, Miss Maudie, who thinks she’s the Supreme Being. She’s probably right.
What do I like to write? At the moment WORDS WOULD BE GOOD! Damn it. I digress. My husband once called my work ‘charming anarchic oddness’, I told him to sod off. I’ve been told it’s ‘sinister’ (hat tip to KT Davies) but I tend to think I’m writing things that are quite jolly, a bit grim maybe but usually jolly (perhaps it was too much Enid Blyton as a kid). Take Kitty Darling in ‘How To Be The Perfect Housewife’, she’s pretty upbeat… isn’t she?

Frankly, I’ll have a bash at anything. Defining one’s work by genre is only useful for marketing and libraries. The work itself shouldn’t be constrained to fit into preconceived definitions, that’s the antithesis of speculative fiction, surely? Possibility is everything. There’s comfort in tradition and tropes, I can’t and won’t deny that, but I say mix it, mash it, spin it, wear it your own way. Ain’t no party like an interstitial party, son.

I’ve been impotently scribbling stuff for years but only really started to send my work out about three years ago. I sent a very short story, called ‘Don’t Do It Salvador!’ to the fabulous Kate Laity’s inaugural Postcard Fiction Contest in 2012 and won.  That gave me the confidence to enter Fox Spirit’s International Talk Like A Pirate Day competition the same year and, along with two other writers, I won that as well. ‘Leave the Pistol Behind’ was then published in Fox Spirit’s Piracy Fox Pocket. Those two women – Kate and Adele (the Prof and the Cap) – are my spark plugs. I can’t begin to explain how supportive they’ve been of both my work and of me. I will never be able to thank them enough. They’re phenomenal women and I’m bloody lucky to know them. Without them, I’d likely still be fiddling with myself in the dark. So to speak…

All of them! I’ve always been a reader – my mum still proudly tells people how I read Jane Eyre when I was only five and a half. There were always books in our house and I wasn’t censored, so I pretty much read anything. I was obsessed with Enid Blyton books as a kid and the shelf I kept them on got so loaded it fell down. Imagine nearly being crushed to death by Blyton! That affects a person. As a teenager, I devoured Stephen King and Dean Koontz, wrote a million Terry Pratchett pastiches, read Hammett and Chandler, the Pern books (because Mum’s a fan), Cherryh, Atwood, Ellison, Clarke, the list goes on and on. I even remember reading a Philip José Farmer story about zombies having sex with prostitutes and their willies breaking off or some such business… these are the things that scar a kid, no?

As an adult, Caitlin Kiernan and Poppy Z Brite have influenced me. Not in terms of style, perhaps, but definitely in terms of telling the story you need or want to tell in the way you want to tell it. That’s an important lesson for any writer.

Art influences me a great deal too; my dad’s an artist, so I grew up surrounded by the smell of Swarfega and ink, but it was Mr Y who really ignited my love for it. I’m rather partial to Surrealism, especially that by women. When I discovered Leonora Carrington’s work, I was blown away. Then I found her written work and it changed me. It loosened my girdle, if you will, made me more inclined to go with the pictures in my head and not tame them into something more ‘acceptable’. Read her novel The Hearing Trumpet or the short story ‘White Rabbits’ in the Vandermeers’ Weird anthology. In fact, do both.

The Wicked Witch of the West. I was obsessed with the 1939 The Wizard of Oz as a kid, and was genuinely upset every time that little cow chucked water on her beautiful wickedness. I don’t blame her for being pissed off – they were her shoes! We’ve only got Glinda, the desperate ‘Wizard’ and those whiny bloody Munchkins’ word that she’s up to no good. She wants to take control over a country currently controlled by an information withholding, passive aggressive bubble-driver and a snivelling impostor. More power to her. Also, I’ve always thought she looks like my Mum. In a good way…

You recently narrated a story for the Cast of Wonders podcast – how did you find the experience and is this something you would like to do more of?

I’ve done two or three now, and it’s fun to do something different. It can be a little taxing, hearing myself drone on for ages, but other people seem to like it so that’s a Brucie. Finding the right time to do it can be a challenge because the kids in the apartment upstairs were born with lead feet. I can go through about a million takes because of their sudden hippopotomatic incursions. I want to get it as right as I feel I can, so it can be more time-consuming than I originally thought, but that’s something I need to get better at. I’d happily do more.

What’s the appeal of short fiction for you?  And do you have any plans for longer works?

For me, certainly at the moment, short stories are the exploration level of writing. I’m trying things out, looking at different styles, working out my kinks, finding my way, and so on. I love flash fiction, things less than 2000 words. It’s like being a prose ninja. You run in with an idea, smack your audience upside the head with it, and then run off, leaving them to wonder, with any luck, what the hell happened, if there’ll be more, and how lucky they are to be alive (maybe not that). There are plans for longer works – I’m writing a collection for Fox Spirit at the moment, and after that I’ve got to crack on with the novel I’ve discussed with Adele. A woman gets mixed up in some nasty business and, after trying to go on the run, ends up in another world. It isn’t steampunk, it isn’t high fantasy, I’m not sure what it is, but it should be fun. I’ve also got an idea involving Primordial Gods in an unlikely setting, as well as some thoughts about an Elizabethan adventuress. So I’d best crack on!

Much of your fiction and poetry combines the comedic and macabre, and this seems to be a popular genre combination across multiple storytelling mediums, from the big screen to the printed word – why do you think these elements mesh so well?

The whole comedic/macabre mash up is appealing because laughing in the face of evil gives us a sense of control or at least the semblance of it. Evil can only truly win when you can’t turn around and laugh in its face. It’s defiance, the good old two-finger salute, that keeps us going in the face of so much darkness. There’s an old cliché that’s goes along the lines of ‘wherever there’s darkness, you should shine a light’ – or is that a Katrina and the Waves song? Anyway, for me that light is laughter.

Dong covers. You know the ones? High fantasy books with a big arsed penis-replacement sword on them. Puh-lease.

It seems a long way off, but next year I should be attending Edge-Lit and redcloaking at Fantasycon again. Maybe even another con, we’ll see. It’s invigorating to be around likeminded souls. I’m at home alone most of the time, so I think it’s essential to my sanity to consort with cohorts at least once a year. Also, redcloaking at Fantasycon means that I can attend without hanging around like a bad smell. I’m not always entirely sure what to do with myself, so it’s a good way to go but not lurk. You know what I mean?

Workwise, I have more stories coming out in the remaining Fox Pockets series plus, at some point, another in an anthology called Eve of War, which sort of follows on from their BFS award nominated Tales of Eve. Next year should see my instalment in the Feral Tales series from FS come out. Adele keeps on at me to branch out and write for other people and to get myself an agent. I’m still learning though, still pretty inchoate as a writer, so I’m not rushing but I do need to let fly, to take myself seriously. I’m working on it.

Thank you for joining us Chloë!

Chloë Yates is a writer of odd stories. English born, she currently lives in the middle of Switzerland with her bearded paramour, Mr Y, and their disapproving dog, Miss Maudie, surrounded by books, effigies of owls and the great god Ganesh. Chloë got her first taste of success in May 2012 with her very short prose piece ‘Don’t Do it, Salvador’, which won the inaugural Postcard Fiction Contest, published at: http://kalaity.com/2012/05/23/writer-wednesday-post-card-fiction-prizes.

Her story ‘Leave the Pistol Behind’ was one of the winners of Fox Spirit Books’ International Talk Like a Pirate Day in 2012, and her noirish chops have slathered into the Noir series, edited by Kate Laity – Weird Noir (2012) Noir Carnival (2013) and Drag Noir (2014). More of her work features in several anthologies, including all but the second volume of Fox Spirit’s Fox Pocket series.

Occasional ranting occurs in her blog at http://www.chloe-yates.blogspot.com and she wanders through twitter under the sobriquet @shloobee. She’s currently working on a big idea or two and writing more short stories.