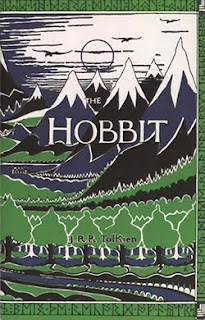 Hmm, I think it would have to be The Hobbit. It had something of a lasting effect on my childhood. I first encountered it at primary school when we had it read to us by a teacher whose name I have, alas, forgotten. But he did all the voices and so I can't read gollum and the trolls without hearing his version of them.

And the songs! As a wee lass I loved the songs in the book to the extent where I'd make up tunes for them and go around the house singing them. And then when we got a computer program that could read out the written text... well, that was hours of fun typing them in then changing the spelling to get the right inflections.

Ooh, and translating the runes at the front was also a favourite thing. Once I'd worked out the alphabet (and was very proud at having cracked it) I spent an entire summer writing secret things in runes. (It is quite possible that The Hobbit is responsible for turning me into a huge nerd!)

And that's before you get to the riddles and the map (maps in books was a new thing for me then) and the dragon and the sneaking around invisible and the spiders in the forest... and I went through two copies of the book before I ever got near The Lord of the Rings.
Posted by Jenny Barber at 7:34 pm