Hawk and Fisher! How is this even a question? Found in the Hawk and Fisher & Forest Kingdom series by Simon R. Green; she's the princess who was sent to be a sacrifice to a dragon, he's the younger prince who was sent to slay it. Only, turns out the dragon is the one who needs rescuing from her. And when they're done with the whole save the kingdom from terrrrrible peril thing, they throw in the royalty business in favour of wandering off, changing their names and becoming cops in a far off city. Much hijinx ensue.

And as a couple, they rock. They have an excellent relationship that, as written, shows them as absolute equal partners who trust each other implicitly while they get on and do much heroic stuff. And the witty banter is just an extra bonus. 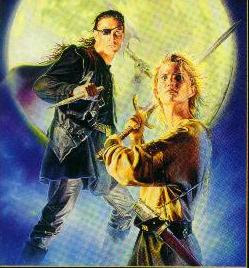