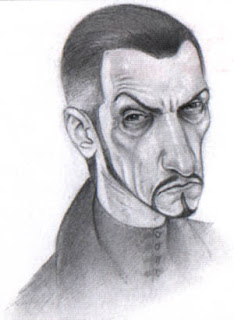 Although, I'm not sure he technically counts as an antagonist, because, yes, he constantly challenges assorted protagonists and he is considered the primary threat in Ankh Morpork, but, ultimately, his deeds stablise the city and give positive opportunities to assorted characters.

Nevertheless, this is a man so terrifying that the mere sight of him was enough to make a previous patrician die of fright and, let's face it, the guy's a sneaky genius, and, just, well, quite cool!
Posted by Jenny Barber at 2:33 pm