Day 16! Genre novel with the most intriguing plot.

Well it's deffo going to have to be Mira Grant but will it be Feed or Deadline? Oh, definitely Deadline. 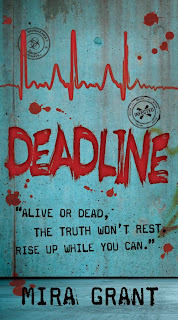 Great mother of pumpkins, people, Deadline! And I can't even tell you why it's an intriguing plot without giving away the jawdropping revelations that pop up.

So, generally speaking, what you have is a glorious post-zombie-apocalypse world where your average peeps are co-existing with the shambling undead. Who, as I recall, get smarter the more of them in a swarm. (The undead, that is, not the average peeps, who one might imagine go the other way when in crowds...) There's plenty of mad science and even madder scientists. There's blogger and other online writer types as the heroes who have to navigate their way through increasing peril and crazed conspiracies. There's the persistent threat of the mutating virus that has more to it than previously thought, there's the dodgy genetic engineering and the clones and...and... mad science, people, mad science!

And dear god that ending. It is lethal. Lethal, I tell you. And reading the preview of the next book is even worse because it's going to be soooooo long until it's out in May 2012.
Posted by Jenny Barber at 10:29 am