Today we’re joined by the author of Wicked Women story ‘A Change in Leadership’ – Jonathan Ward, take it away!

Tell us a little about yourself and what you like to write: 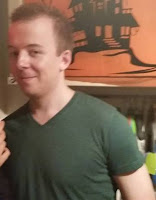 I’m 32 years old, and have been writing science fiction, fantasy and horror for many years now. It’s not how I make a living as yet, but I aim for it to be that some day. In my spare time I read relentlessly, battle a long-running addiction to tea, garlic bread and Jack Daniels (in no particular order) and occasionally throw myself off high platforms or out of planes. Standard stuff.
How long have you been writing and how did you get started?

I started when I was eight, or around that time. Back then I had a lot of notebooks and used to fill every page, front and back, with stories that were, I have to be honest, poorly-written and total rip-offs of things I had seen and already read. I had a recurring villainous wizard called Ommadon, and I’m sure many of the people reading will know that name well! Luckily I got better, and more original, fairly quickly!

It took me a while to trim down the list of authors so I could answer this! Arthur C Clarke was a massive influence; I read most of his books from my local library when I was younger and he probably got me hooked on sci-fi. More recently: Neal Asher, Peter F Hamilton, Iain M Banks and Stephen Baxter have been big influences. I can’t forget Ursula Le Guin; I loved Earthsea when I was a child and really need to read her works again. Finally, this list wouldn’t be complete without Terry Pratchett. I own dozens of his books and love the imagination and charm in each and every one of them.

The first woman I thought of was Sharrow, from Iain M Banks’s Against A Dark Background. She kicked arse and got things done, all with an acerbic wit and flair that helped make up for her not being exactly the most moral or sympathetic of characters. Writing this has made me want to read the novel again, actually!

You started out a science fiction writer but moved onto horror and fantasy – do you have a current favourite genre to work in and why?

It has to be science fiction I think; it was my first genre-love and still is! I love the scope of it; there’s so much room to play with new and interesting concepts, or put your own spin on familiar tropes. I’m growing to love fantasy more though as time goes by, particularly as I come across novels that aren’t all the familiar “sword and sorcery” theme.

What can you tell us about the Outliers project?

Outliers is a collaborative project between myself and four other authors. We’re aiming for ten books of linked anthologies set in a shared universe, divided into two five-book arcs. As to what it’s about… well. What would you call a superhero, in a world that doesn’t permit heroes? A world where everyone is down in the moral mud, and those with abilities are either feared, hunted or expected to change everything? Could that world live with people with powers, and if it could, would they want to be part of such a place?

Short stories set in the Outliers universe have already been released, and our first novella anthology should be published early next year. I’m extremely excited about it, and hope people will enjoy reading it as much as I have working on it!

As a reader I enjoy it because you can read a whole story in one sitting, so it’s very accessible and a good introduction to new authors. As a writer I enjoy the challenge of creating new worlds and telling decent stories within a tight word-count.

I always recommend Lovecraft: regardless of his personal views, the man knew how to write compelling, horrifying stories. China Mieville always finds ways to tell interesting tales; he’s one of my favourites.

I’d have to say the idea that AI will try and exterminate us. It’s been done so many times that the concept has got a little old, though there are authors out there that still manage a fresh approach to it.

At time of writing I’m close to finishing the first draft of a fantasy novel set in the same world as ‘A Change of Leadership’, and featuring some of the same characters.  After that comes the holiday period and a well-deserved rest before the writing bug gets me back to work on something new!

Thank you for joining us Jonathan!

Jonathan Ward is a science-fiction, horror and fantasy writer hailing from the sprawling urban metropolis of Bedford. He has wanted to be an author since the age of eight, though it’s questionable whether his writing talents have improved since then. When not writing he can be found reading a good book, out exploring new places, or in the pub being sarcastic to his closest friends.
Jonathan’s Author Central page containing links to all of his published work: http://www.amazon.co.uk/Jonathan-Ward/e/B002BLQ8HA/ref=ntt_dp_epwbk_0
Jonathan’s Facebook writing page: http://www.facebook.com/pages/The-Written-Ward/339336243357
Follow Jonathan on Twitter: https://twitter.com/WrittenWard
Posted by Jenny Barber at 2:14 pm