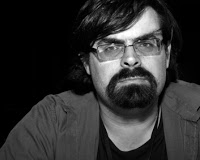 To celebrate the release of the ebook editions of Ancient Wonders, we gently harassed our faaaaaabulous authors for a little behind the scenes action...

First up to the chopping block - Adrian Tchaikovsky


Tell us a little about yourself, and what you like to write?

I’m a writer of epic fantasy, with eight books out in my series Shadows of the Apt and the ninth coming out this August. I’m also a lawyer (civil litigation) and my interests include LARP, RPGs (games, not grenades), sword techniques and zoology, but I had been working towards becoming a published author for a long time.

My current series is set to run to ten books, charting a conflict between the insect-kinden that takes them into their equivalent of the 20th century, and a world war. I’m currently working on a number of future projects in different settings.

What inspired you to write “Bones”?

“Bones” is set in the same world as the Shadows of the Apt series, and draws on a chance reference a character makes in The Sea Watch to an archaeological site where the deep past of the insect-kinden’s world appears to have been uncovered. This sparked a lot of speculation amongst readers, so I decided that the site deserved a story of its own. When the call for the Ancient Wonders anthology came along it seemed the perfect opportunity to write it.

If the TARDIS could drop you off to any one site in its heyday, where would you go?

With deep apologies to the whole of human history, I think that I would need to tool up and go see the truth behind the fossils. The choice isn’t Ancient Rome or da Vinci’s studio, for me, it’s Cretaceous or Carboniferous, or scuba diving through the Burgess Shale fauna.

What appeals to you most about ancient sites/landscapes?

There is nothing more evocative than an ancient landscape, civilisation or relic that still retains its mystery. All too often that turns out to be something of a false promise, but when confronted by something like the Antikythera mechanism, or the as-yet unopened tomb of Qin Shi Huang, it’s a window onto a past that remains as mysterious and elusive as myth.

What do you have coming out next?

The last two volumes of Shadows of the Apt should be out this year and next, after which I have a stand-alone fantasy, Guns of the Dawn, which takes place in a sort of alternate 1800-style of setting, concerning a bitter war between two formerly close nations. My personal tagline is “Jane Austen meets Bernard Cornwell by way of Ursula le Guin.”

[Adrian Tchaikovsky was born in Lincolnshire, studied and trained in Reading and now lives in Leeds. He is known for the Shadows of the Apt fantasy series starting with Empire in Black and Gold, and currently up to book eight, The Air War. His hobbies include stage-fighting, and tabletop, live and online role-playing.]

The Alchemy Book of Ancient Wonders is available in paperback and ebook formats from multiple retailers - see the anthology page here for linky links!
Posted by Jenny Barber at 4:16 pm